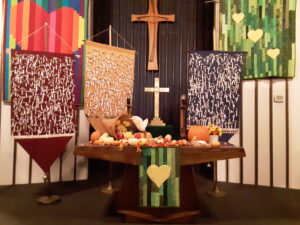 One special day in the season of Pentecost is All Saints Day. Most Christians around the world celebrate it near the end of Pentecost on November 1 or 2.**

So who are the “saints,” anyway? While some denominations have an official process of recognizing them, many Christians around the globe see saints as everyday people: those who try to follow Jesus by the way that they live and who leave a positive effect upon others.

Writers in the New Testament agree. St. Paul (yep, he’s one of them, too) greets the “saints” in his letters to the house churches in the towns of Corinth, Ephesus, Philippi, Colossae, and other places. By this use he meant everyone worshiping there. He was giving them the benefit of the doubt: that their actions were making them positive models for other people. Likewise, the writer of the Book of Hebrews described saints as “the great cloud of witnesses,” those who were faithful in their living and now cheer us on from the stands as we run the race of our lives. Revelation wrote about “the righteous deeds of the saints” over past centuries and ended the entire Bible with a blessing by saying, “The grace of the Lord Jesus be with all the saints. Amen.”

“On All Saints Day we try to remember all the people we know who lived holy and exemplary lives, and how they influenced us to the good,” a priest once told me.++ But this doesn’t mean saints have to be particularly religious or perfect. They engage their spirituality in different ways. For example, I think of Dr. Martin Luther King, Jr. and Dolores Huerta as advocates for justice. My Grandma K. was a saint in how she expanded her once-narrow box of pride as a Mayflower descendant to include those who now do peace and freedom protests in God’s name.

There are plenty of ways to remember and honor our personal saints in an at-home way. For example:
1. List those who come to your mind as saints for their common values or one or more “fruits of the Spirit,” then thank God for each of them by name.
2. Carve a spooky face on one side of your Jack O’Lantern, and a Christian symbol on the other side for the next day. Turn the pumpkin around for November first.
3. Make a favorite recipe they used to make and tell stories about them around the table.
4. Read online about someone you think you might admire and write down the qualities of their lives you’d like to imitate in spirit.
5. Prop up a photo of an ancestor or previous person of faith you would like to have known. Light a votive candle, and thank God for the qualities they had and you hope to have in your way of living.
6. In the evening, put names of your personal saints on paper bags and turn them into luminaries by filling them with some sand, putting in a small candle, and lighting the flame. Then stroll among the luminaries, thanking God for their helpful impact on those who live after them.
7. Search the Web for a song that fits the day or a theme that fits the witness of their lives. Good overall songs include “For All the Saints” and “All God’s Children Got a Place in the Choir.”
8. Throw an All Saints Day party for yourself and a few friends. Encourage people to come in costume and bring a story about that person to share.
9. Look up the writings or activities of someone in the past you admire. Copy some of those readings or quotations and sprinkle them throughout your day, to ponder as you engage in your normal activities.
10. Who are the cloud of witnesses for you personally? Identify one of them and hold an imaginary interview or conversation on some of the issues you’re dealing with today?
11. Write your own Letter from the Past (also known as an ethical will), to share with the next generation your values and the experiences that have shaped your life.

Above all, let All Saints Day be an inspiring family reunion for you with people of faith from the past through your lifetime and those who will come after you.

** – In the Eastern Church (Russian, Greek, and other Orthodox churches), worshipers celebrate All Saints on the Sunday after the Day of Pentecost, in late May or early June.