In recent decades across much of the world, the phrase “the twelve days of Christmas” refers to the twelve days before Christmas – as in shopping days to buy presents before Santa’s Big Day. But from ancient times, that proverbial phrase has referred to the days after Christmas Day, together making up the worship season of Christmas. 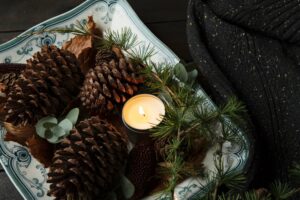 But don’t be surprised if those twelve days get you mentally humming a popular tune with fanciful words about “a partridge in a pear tree” and other strange gifts that “my true love gave to me.” The song itself was first published in England back in 1780. However, millions of people think there’s a deeper meaning that goes further back than that.

Not everyone agrees about those secret meanings, but several Roman Catholic sources^^ say the words were a “hidden catechism” from the 1500s, meant to secretly teach their core beliefs when Catholics were persecuted and killed for their faith. My book, Tossed In Time: Steering by the Christian Seasons,** explains what now has become a common Christian understanding of the words:

The Christmas season is more than realizing why God chose to become human to lead us. It’s also a time of learning or remembering how a Christian can decide to live, and a time to recall what we can draw on for strength and purpose.

For example, in that ancient song about the twelve days of Christmas, each element can have a second, deeper meaning:

The partridge in a pear tree is Jesus Christ.
Two turtle doves are the Old and New Testaments.
Three French hens stand for faith, hope, and love.
The four calling birds are the four Gospels: Matthew, Mark, Luke, and John.
Five golden rings recall the Torah, Law or “Teaching,” the first five books of the Old Testament.
The six geese a-laying stand for the six days of creation.
Seven swans a-swimming are the seven gifts of the Holy Spirit:
prophesy, serving, teaching, exhortation, giving, leadership, and mercy.
The eight maids a-milking are the eight (“Blessed are . . .) statements, [the Beatitudes].
Nine ladies dancing are the nine fruits of the Holy Spirit:
love, joy, peace, patience, kindness, goodness, faithfulness, gentleness, and self-control.
The ten lords a-leaping are the Ten Commandments.
Eleven pipers piping stand for the eleven faithful disciples.
The twelve drummers drumming symbolize the twelve points of belief in the Apostles’ Creed.

With this song, people don’t have to be able to read or have books beyond the Bible to get all the hallmarks of a moral life. We can sing the song and know what’s important for Christian living.

In today’s blog, I have added links to the Christian phrases above, so you can read more about them if you like, and then ponder these questions:

• Day 1 – Paul told the Christians in Corinth that the main thing is to know – meaning have a relationship with – Jesus as the Christ (“God’s anointed”). What is the one essential thing about your relationship with God that holds everything together for you?

• Day 2 – As the two parts of the Bible, the Old and New Testaments (Latin for “covenants”) show God staying in relationship with people from different perspectives. Have you experienced God being faithful in relationship with you, even at times when you could have cared less?

• Day 3 – Faith, hope, and love are all important, but Paul says love is the greatest. Love is caring for someone, not an emotion. Have you ever cared for / helped a person you didn’t even like or know? Why? Did that change you in any way? Has anyone done that for you?

• Day 4 – Each of the four Gospels says the message about Jesus in their own way. If you were to tell someone about him, how would you say it?

• Day 5 – The first five Books of the Bible are Genesis, Exodus, Leviticus, Numbers, and Deuteronomy. They tell history and teach in wildly different ways, and they’re honest about human treachery and indifference, as well as about their faith and positive behavior. What are the main lessons you draw from these five Books?

• Day 6 – This story of the six days, or epochs, of creation is one way of describing how the world came to exist. Chapter 2 of Genesis gives a second way of describing it. When a small child asks you why the sky is blue or where different peoples come from, how do you put your answer into words?

• Day 7 – Ideally, how should members of your family, friends, or community relate to one another? What would it look like if we willingly shared our abilities, gifts, or perspectives with one another for the common good?

• Day 9 – People don’t have to talk about these traits, but they’re pretty easy to identify in people around us. Which one is the most difficult for you? Which one tends to come the most naturally?

• Day 10 – The Ten Commandments (“ten words”) are known around the globe and point to ethical living in many religions and philosophies. Which one of these “words” is the most crucial for human community these days?

• Day 11 – Christians are not better than others. Like the first eleven faithful disciples, they just try to trust God and follow Jesus’ values for living. What are the basic values by which you try to live each day?

• Day 12 – Over the centuries, different religious groups have put together various “creeds,” or belief statements by which they want to live. Is there any one sentence in the Apostles Creed or the Nicene Creed that still holds true for you?

“The Twelve Days of Christmas” can be a fun and beautiful song, but it also can draw us into deeper into reflection to prepare our hearts for the coming of Christ once again.

See also: Wonder All Around

Posted in Time, Worship Seasons, Worship and tagged Christmas song, partridge in a pear tree, the twelve days of Christmas