Before I moved to a wooded rural area I was aware of forest fires, but they were more of a news item than a persona 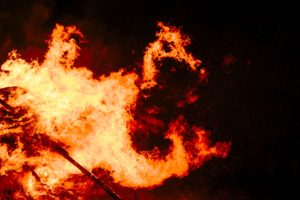 l issue. Since moving to the Sierra foothills, fires have become the biggest potential danger to us, our critters, and our home. But now, with the new normal of California crispiness, metropolitan homeowners can feel as threatened as country folks.

Stories of generous caring abound Statewide, where firefighters and volunteers from neighboring areas and across the U.S. have converged on fire-ravaged areas. At the Carr Fire, the flames were so severe that the fire created its own internal tornado. There, specialized teams are uncovering hidden pits of ash and pulling down unstable trees for the future safety of residents when they are allowed back in to their properties.

At the Ferguson Fire near Yosemite, Pastor Allison Byerly is monitoring the situation and determining needs of evacuated campers and Yosemite workers, along with VOAD, a coalition of disaster response volunteer organizations. Up in Siskiyou County, Pastor Toni Hartman, who is also a Sheriff’s Chaplain, and members of her congregation are helping at the Klamathon Fire.

Smaller fires pop up each day this summer, including one this week thirteen miles from our home, where ground crews, helicopters and two air tankers stopped its forward motion in less than 24 hours. A nearby school opened up as an evacuation center, and local folks rounded up and cared for the residents’ livestock.

Generosity comes in many forms, including personal volunteer involvement, money donations, grants, state funds, and more. Thank You, God that many people are responding with generosity!

Your partner in ministry,
Betsy Schwarzentraub