God’s creation is a lot more powerful and mysterious than we human beings usually think. And most of it is certainly not tame. 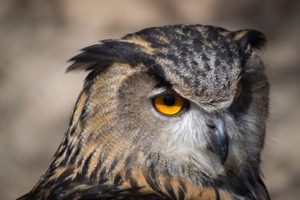 I was on our back deck, looking out into our woods mostly of ten- to twelve-story pines, when hundreds of resident wild birds sounded the alarm, circling and screaming at one another. Clearly a predator was approaching, and they were issuing calls of life-threatening danger. At last it went quiet, but then broke out once more in feathery chaos under the canopy heights.

A while later I looked up, suddenly noticing sheer silence. No birds or little creatures were anywhere in sight. And there, at least eighty feet up, was the silhouette of a Great Horned Owl, sitting on a pine branch. It was utterly silent and still.

Great Horned Owls are massive creatures, large enough to eat a skunk or a grouse. They’re usually nocturnal, but apparently a fall late afternoon was dark enough to move into position. Every creature went silent, and no one moved. Down our hill and over the lake, there wasn’t a bird in sight.

Miraculously, the woodpeckers came: all fifteen of them that live in our treetops, usually the alphas among all the birds in this Sierra foothills location, sometimes cavorting on the wind in big circles or storing acorns in the bark of certain trees. But now they came out in force, screeching their curses, alighting on branches dangerously close, all screaming at the intruder.

But the owl stayed still, as if inert. And waited. Eventually, in one big sweep, the woodpeckers left. Silence resumed. Much later, some Stellar Jays moved in close, taunting, and getting a menacing dip of the head when they came within inches. But the owl held to its branch, too much the predator to be moved.

Down on the ground, horses and dogs went about their business, too large to be considered dinner. Were they aware of the silent observer far above them? All went quiet once more in the trees, as the great owl waited. When the sun goes down, it will be silent and swift.

Posted in Stewardship of the Earth and tagged God's creation, Great Horned Owl