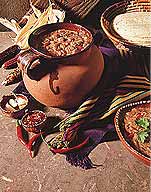 Living more simply is not necessarily living more easily. In fact, it often means putting in more time and effort to do things the old-fashioned way. Take food, for instance – finding it, preparing it, cooking it – choosing more natural, organic foods, without preservatives, fillers, or radiation that kills the “food” part of the food – let alone developing balanced nutrition. This is especially challenging for people who live outside metropolitan areas, where organic grocery stores may actually exist. But even in the city one has to read all the fine print and say No more often than Yes. And (even if you have a huge truck garden and a great supplier network) it takes real creativity and practice, as well.

Simple-living eating is a whole new world of awareness that requires less time running around in less-than-essential involvements in order to have more time to do the basics. That’s part of the not-so-easy portion of it, as well: deciding what is not important in order to focus on fully participating in what it takes to live abundantly as a physically healthy human being.

But this is also where a dawning sense of satisfaction comes in: when we realize that some of our grandparents’ or great-grandparents’ generations actually had it right – with plenty of salt and potassium, tons of vegetables and a small accent of meat, and lots of exercise because that’s the only way they got around.

That’s simpler, healthier living, whether they knew that or not. But we can know it and start to turn our lives around. The thing is, living more simply is never done. It is lived one day, one choice, at a time.

Posted in Being a Good Steward of Your Body, Generous Living and tagged natural foods, nutrition, organic, simple living