It’s no wonder that so many people have found themselves unable to get a normal night’s sleep for months on end. For many of us, counting sheep just doesn’t do it anymore. 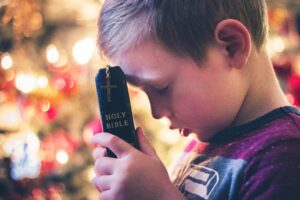 For even the most well-adjusted folks among us, the usual stress of daily life has amplified exponentially by pandemic uncertainties. What used to be our home retreats have suddenly become the impromptu place for full-time daycare and work space. School and work keep switching from the campus or office to home and back again. Many parents of youngsters have felt cooped up with their little ones and anxious for their school-age kids or socially cut-off teens. Most single adults have lost their in-person social networks, and countless seniors have isolated themselves for months on end out of fear for their vulnerable health.

Enough with the bad news; here’s the good news: an ancient practice can help us hold onto a positive outlook. It can remind us that we are not alone and give us a framework by naming the Hours – something for our over-busy minds to focus on in the middle of the night or at any time of the day.

This reminder in the night is what I’ve needed during these months, even years, of virus seclusion. For the most part, thoughts about seclusion haven’t intruded during the day, but they must have been storing up to invade my sleep at night. I came to realize that past research into the Christian worship seasons could help my mind find a more positive Big Picture on which to focus.

When I was a young adult, I spent a month as a volunteer in a nonprofit Christian group. During that time together we lived with the Daily Offices, or “Canonical Hours.” Day and night, every three hours, a few people from our group would step away for fifteen minutes to read a passage from the Gospels and say a prayer together on behalf of the entire group. During those times, I felt a sense of being part of a long line of Christians down through the centuries who have sought to remember Jesus and to join all those throughout history who try to follow him.

The Canonical Hours are part of an old tradition followed today by people in Religious Orders: Benedictines, Jesuits, and other Religious Orders living in convents and monasteries. As a result, even though this is an ongoing rhythm for them, most church-going Christians are unaware of the practice altogether.

Following the Canonical Hours is a way of living every twenty-four-hour period by lifting up a focus for prayer and by recalling specific times in Jesus’ life and ministry.

Benedict of Nursia (480 – 548), founder of the Benedictine Order, set the basis for this pattern in his Rule for Monasteries. Over the years, minor differences in the Canonical Hours developed in the various monastic traditions. So in the 1970s, an ecumenical group divided each day neatly into three-hour increments.

Each twenty-four-hour day begins in the evening, following the Jewish tradition. The adapted Hours are:
• Vespers
From 6 to 9 p.m.
Gratitude and thanksgiving for the day’s gifts. Jesus at the Last Supper and his presence among us.

• Compline
From 9 p.m. to midnight
Penitence and meditation on the day past and examination of our conscience. Jesus in Gethsemane.

• Matins
From midnight to 3 a.m.
Watchful anticipation of the new day. Jesus’ final coming at the end of time.

• Terce
From 9 a.m. to noon
Dependence on God’s Spirit through times of conflict. The coming of the Holy Spirit at Pentecost (Acts 2:1-21)

• Sext
From noon to 3 p.m.
Asking for God’s help for victory over evil. Jesus’ crucifixion.

• None (sounds like “Known”)
From 3 p.m. to 6 p.m.
Perseverance. Jesus as merciful judge of the world in the end days.

At first blush, the Canonical Hours can look super-religious, but they don’t have to be. In these days and nights of pandemic onslaught, I’ve found them a helpful, positive way to focus my mind on the Big Picture of faith in God, knowing I’m not alone in my unknowing. There are centuries of people who have survived pandemics and worse without losing their sanity and hope. Despite appearances, God is in charge and I’m part of God’s people. Counting the Hours helps my mind settle down and gives some restful sleep at last.

Your partner in faith,